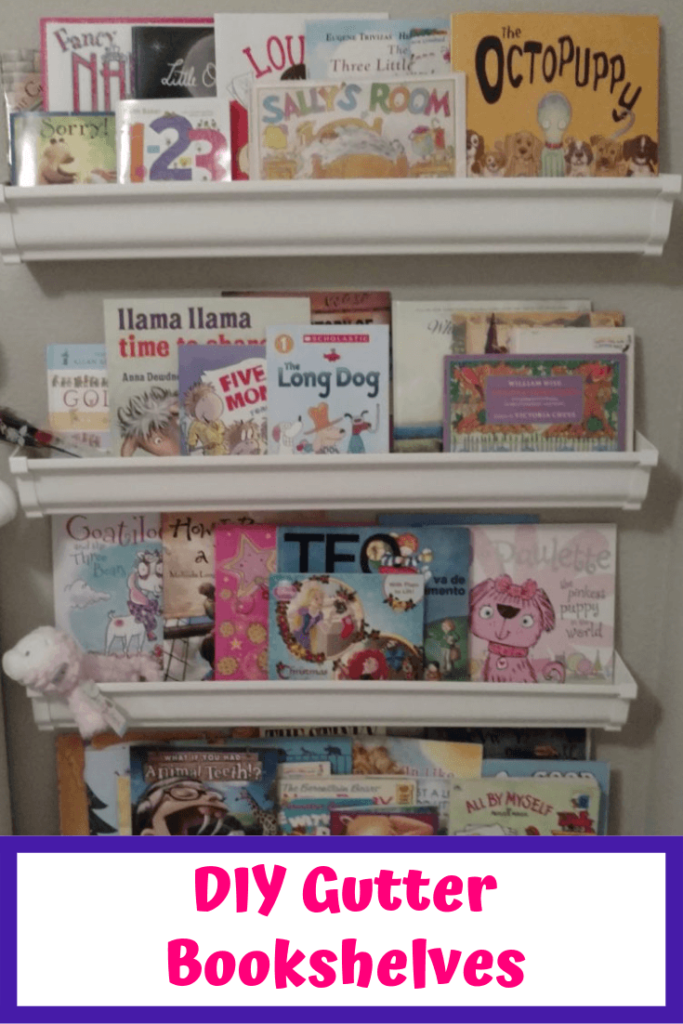 While searching Pinterest years ago, I came upon the idea for a DIY gutter bookshelf.  It was absolutely genius!  I saved it to my boards, and when I was pregnant with my daughter, I rediscovered the pin.  And I had to make one myself!

I Absolutely Needed This DIY Bookshelf

I insisted my husband put in this DIY bookshelf made out of plastic gutters during my nesting phase. Around 37 weeks pregnant, I just HAD to have the baby’s room finished and perfect that very moment.

So…we ended up taking a trip to Lowe’s in the freezing cold late one night after work. We unthinkingly drove my husband’s car instead of my SUV; that made for a rather unpleasant trip home with the windows open to accommodate a 10 foot long rain gutter!  When my daughter was born just a few days after we made this trip, I was so excited to have gotten this project done!

The day after our Lowe’s trip, my husband and Dad were super troopers for getting the gutters cut and drilled to the wall.  That way I could set up baby girl’s books just perfectly before she arrived. It doesn’t matter that she still hasn’t touched those shelves at all almost a year later and instead still reads her hardback books. It was a matter of getting to check completing the nursery off my to-do list before baby girl arrived!

In terms of the specifics, our nursery’s gutter bookshelf had 4 tiers.  I purchased one 10 foot long rain gutter and split equally into four 2.5 feet lengths.  At the end of each shelf, we used the gutter end caps.  Thus, the total number of end caps came to 8.

If you’re looking for a how-to for these shelves, I’d recommend following this YouTube video here.  They’re way more detailed that I could be seeing as I pawned the project off onto the more handy members of my family.

I’m editing this post to let you know how our DIY bookshelf has held up over the years! My second daughter was born three years after my first, so she was moved into the nursery.  She thus inherited her sister’s wall bookshelf.   It was still in pretty good shape.

Here are some pointers I have if you’re deciding to make your bookshelf:
1. Our shelf was low enough to the ground that when my daughter was 10 months old, she started using it to pull up with.  It did not support her weight very well! If you’re not wanting to watch your kiddo like a hawk, I’d recommend putting the shelves a little higher to avoid grabby hands and injuries.

2. Our first go around, we did not glue the end caps on.  After they wiggled loose a few times, we decided to glue them.  That worked out better!

3. Make sure to put screws in several places along the length of the gutter.  We had some heavy books up there for a while, and the gutter did start to sag in some places.   My husband had put screws every 9-12 inches or so, and that wasn’t adequate for very heavy materials.  Or, just make sure to stick paperback books rather than heavy hardback ones.

Even despite these gutter bookshelf limitations, we have loved having it in our daughter’s nursery! And I smile with pride every time I see it.  It was constructed with so much love.  And during my desperately frantic nesting phase as well!

Interested in how baby girl #1’s nursery turned out?  Read more about her pink owl nursery!