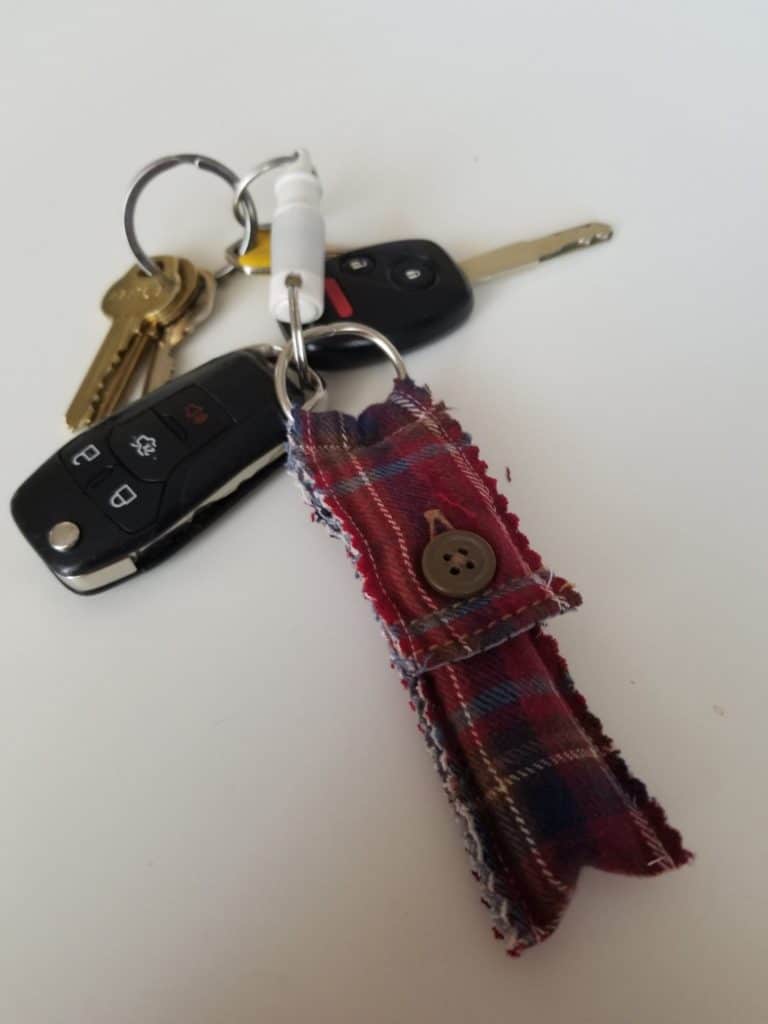 Today’s quick repurposing tutorial will show you how to make your own keychain chapstick holder using the cuff of an old flannel shirt. This is an easy beginner sewing project that can be accomplished in less than an hour.  You don’t even need to use a chapstick holder pattern, just follow the tutorial below and measure as you go using your chapstick as a guide.  (I’ll show you how!)  I also love how upcycling the flannel shirt cuff leaves you with a button that can be used on the top of the lip balm holder to keep your chapstick from slipping out.

I love using my keychain chapstick holder so I don’t have to spend time digging around in my diaper bag for my chapstick!  Especially while driving.   If you don’t already have a keyring chapstick holder, I’d recommend making one for yourself soon!  And make to gift to a friend as well while you’re at it.

Why I Chose to Upcycle a Flannel Shirt

My husband has this flannel shirt that he has had since before we started dating (10+ years). It’s not that it’s a horrible shirt or anything, but he has washed and worn it so many times it has shrunk to where it is just embarrassingly short on him. He loves this shirt though, and I cringe every time he wears it out in public.  Here is the infamous flannel shirt itself: 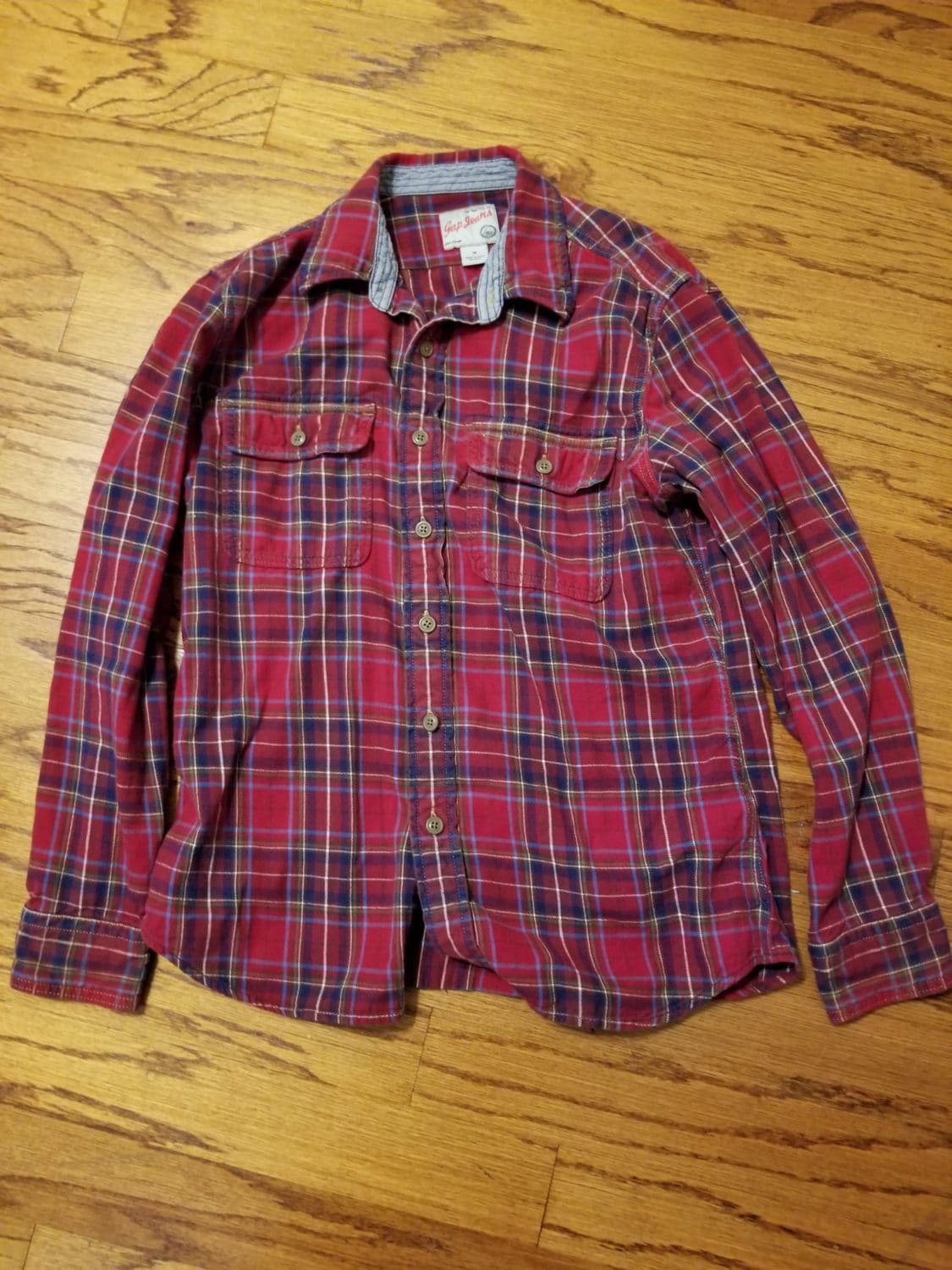 Finally, after years of me dropping subtle hints about maybe replacing the shirt with one that fits better, he decided to do so when Kohl’s was having a good sale. (However, he decided he needed FIVE new flannel shirts!  Men!) Luckily, though, the old flannel shirt was finally retired and the new ones are much more attractive!

I hated the idea of him totally getting rid of his well-loved shirt, though, so I told him I would find some way to upcycle it. Hence, this upcycle project was born!

A few years ago, I made both of us keychain chapstick holders out of fabric loosely using a Pinterest DIY lip balm holder tutorial. Obviously, I must have picked a subpar fabric or we were very rough on our holders because neither of them lasted very long. My husband finally had to retire his for good, so I decided he needed a new one.  And what better way than to make one out of his flannel shirt?  This new sucker is made out of so many thick layers of flannel that there’s no way it will wear through anytime soon!

And now it’s time for a quick tutorial for a DIY keychain chapstick holder.  Let me know if you have any additional questions or if I wasn’t clear enough.

Picking a Flannel Shirt to Upcycle

After you read through the tutorial, you may notice that not every flannel shirt you find will work for this project.  You’ll want to find a shirt that has a button on the cuff if you want a button on the top of your keychain chapstick holder.  Look through all your old flannel shirts in your closet, and check out local thrift stores as well.

You also want to pick a shirt that has a decently wide cuff.  This cuff needs to be at least the width of your chapstick to allow you to slip the chapstick inside.

And lastly, pick a flannel shirt that has a cuff that is neither too wide nor too small around.  Being too large isn’t a deal-breaker because you can always cut off the extra fabric, but if you pick a shirt that’s too small, you may be left with your chapstick poking out the top of your holder.

How to Make a DIY Keychain Chapstick Holder:

First, cut off the cuff of the shirt.  You want your flannel shirt to have a button so you can use that as the top. You won’t have to worry about your chapstick falling out this way! 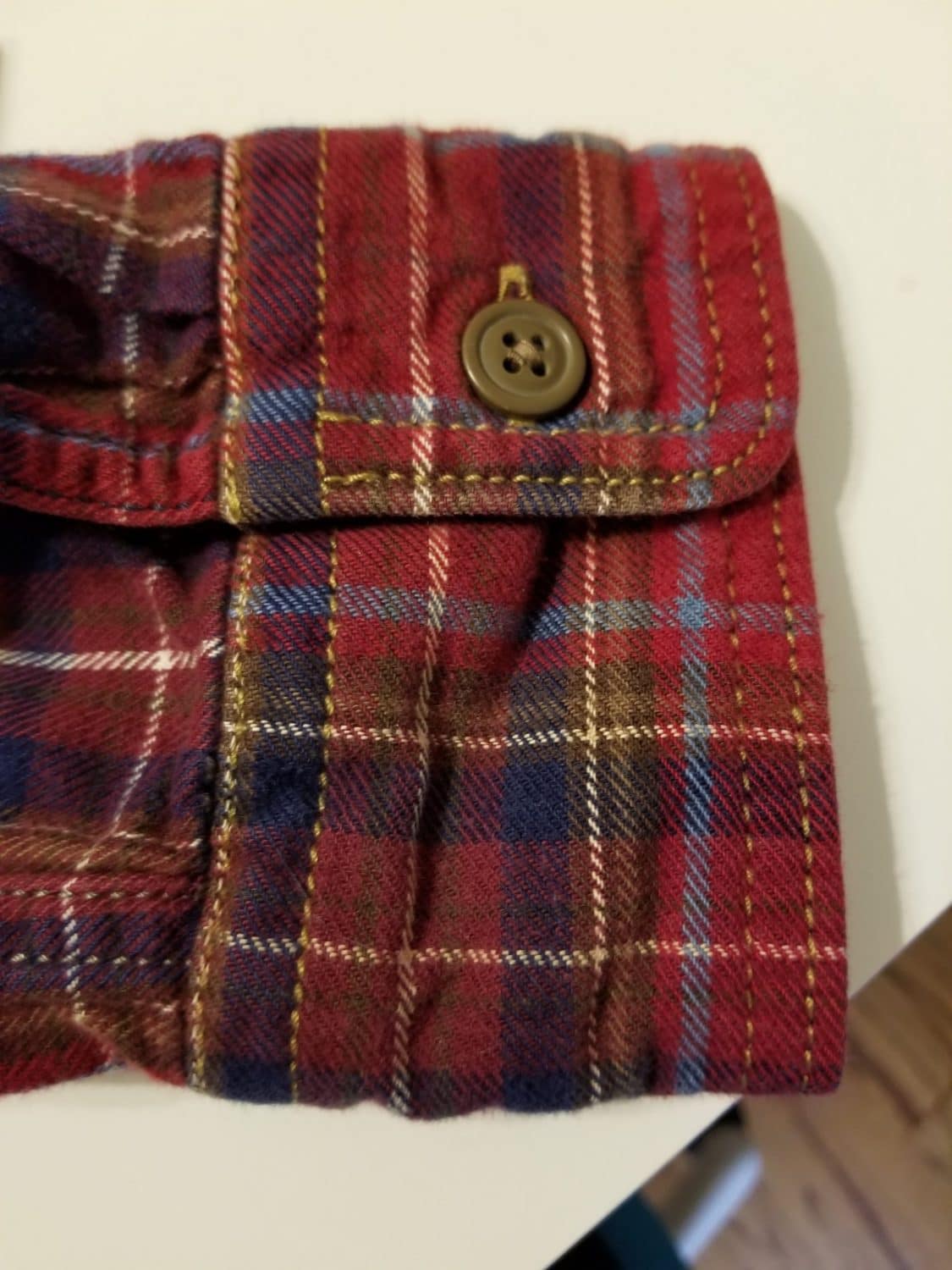 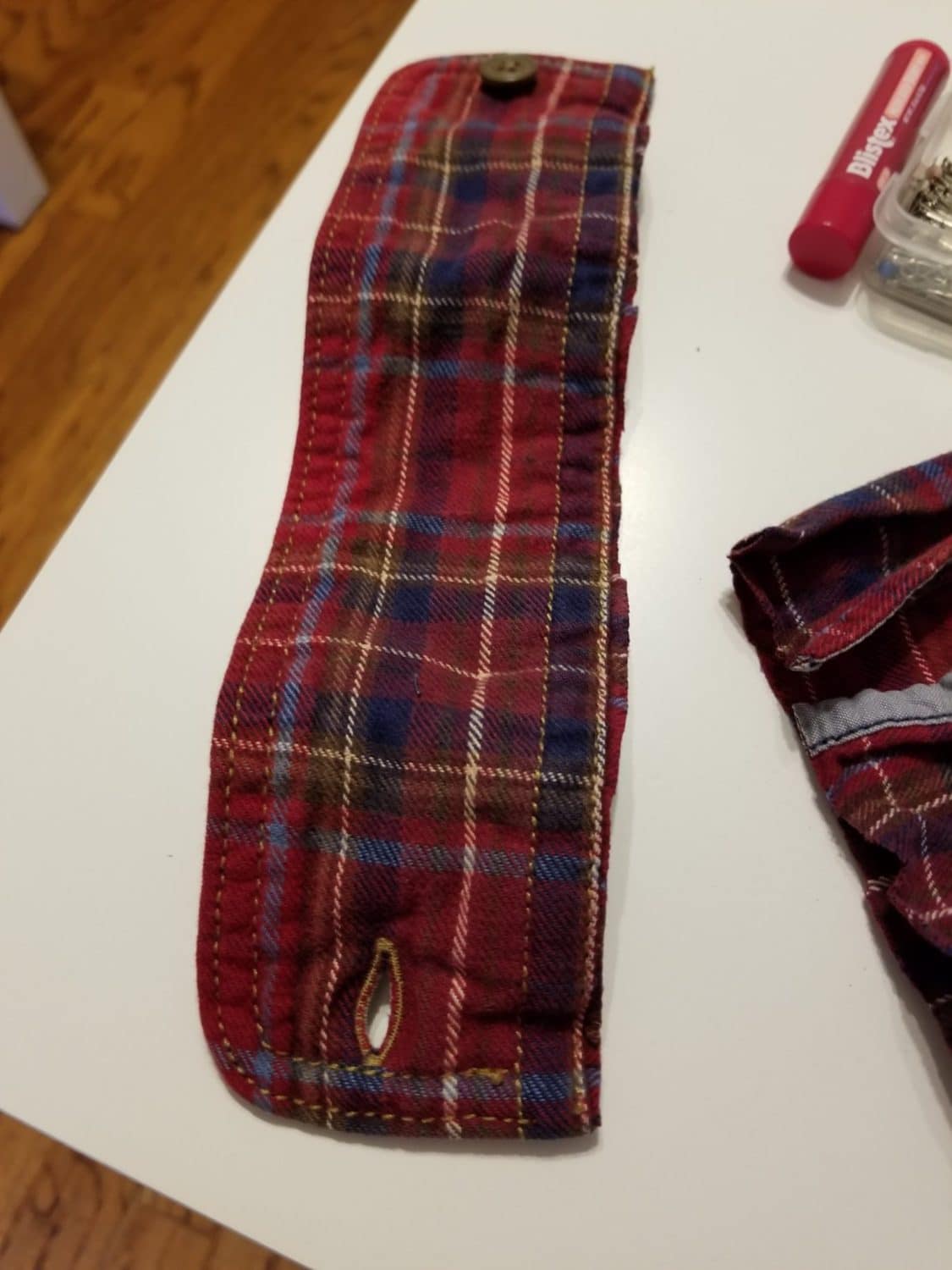 It’s a special touch that the inside of this flannel cuff was a great denim blue color! 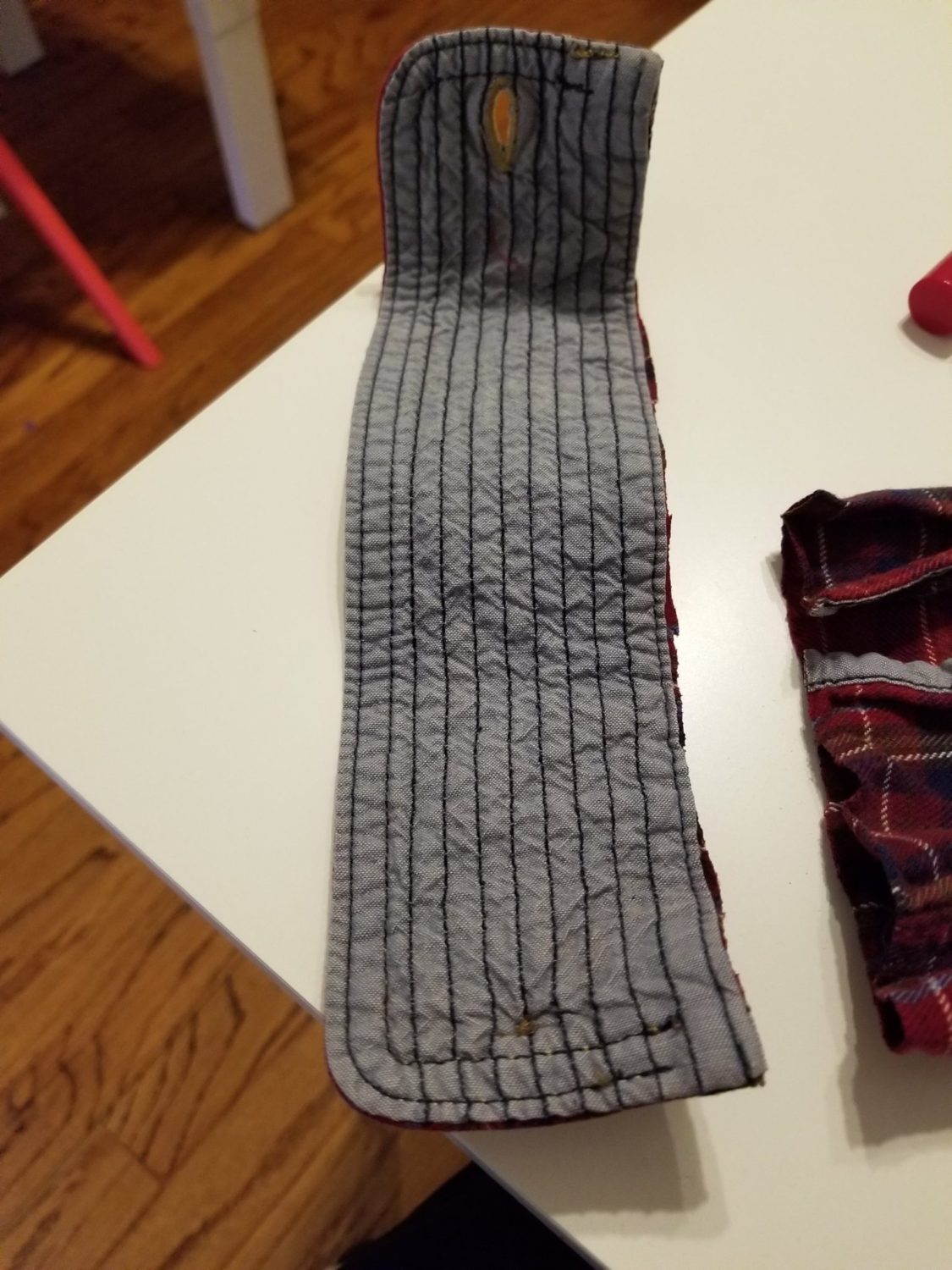 I then cut off the thick parts of both sides where there is the big seam since there was no way my sewing machine would sew through them!  (Well, I wasn’t willing to take that chance and break a needle.) 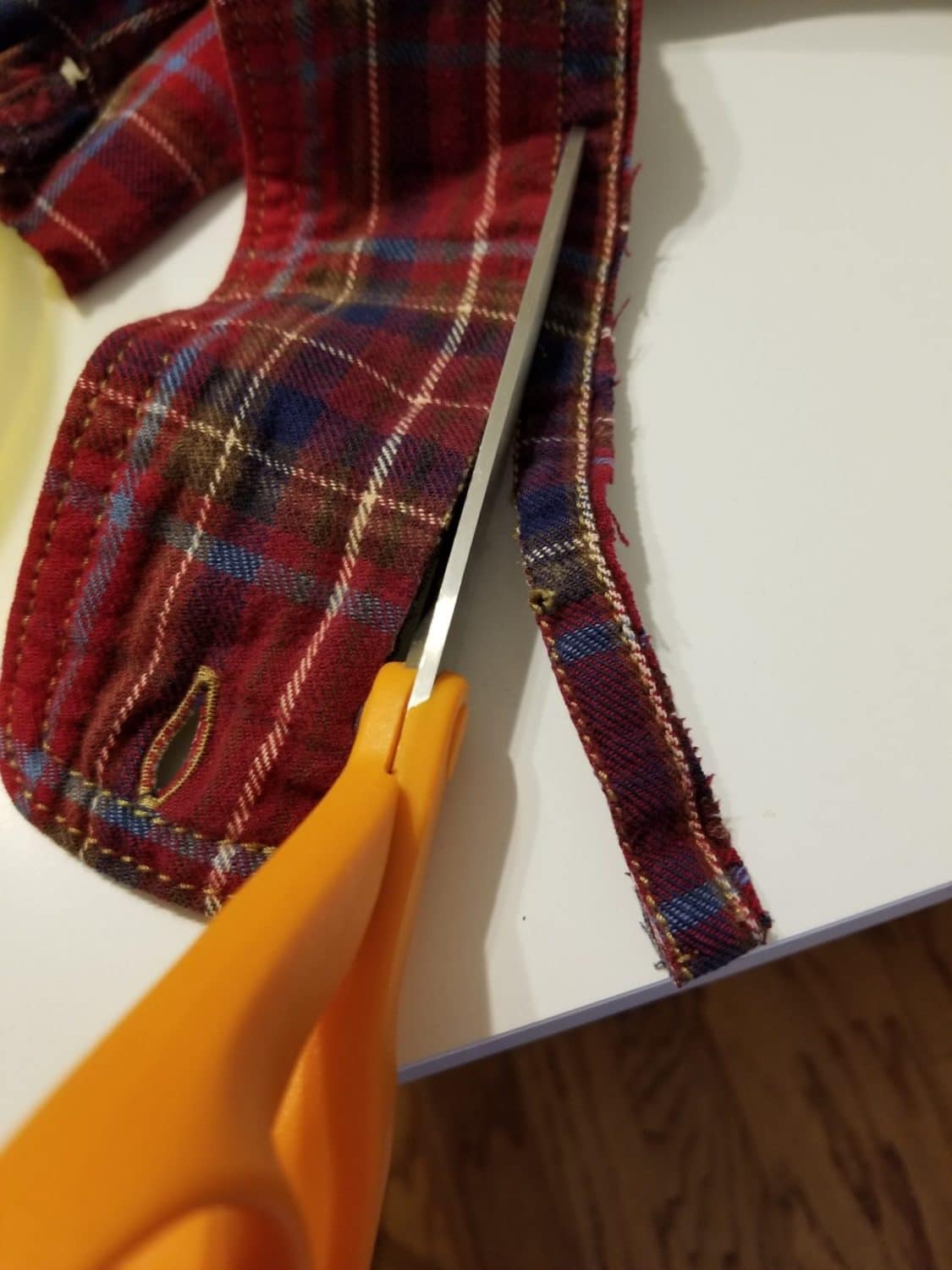 Here’s the result.  A nice length of cuff without any thick edges. 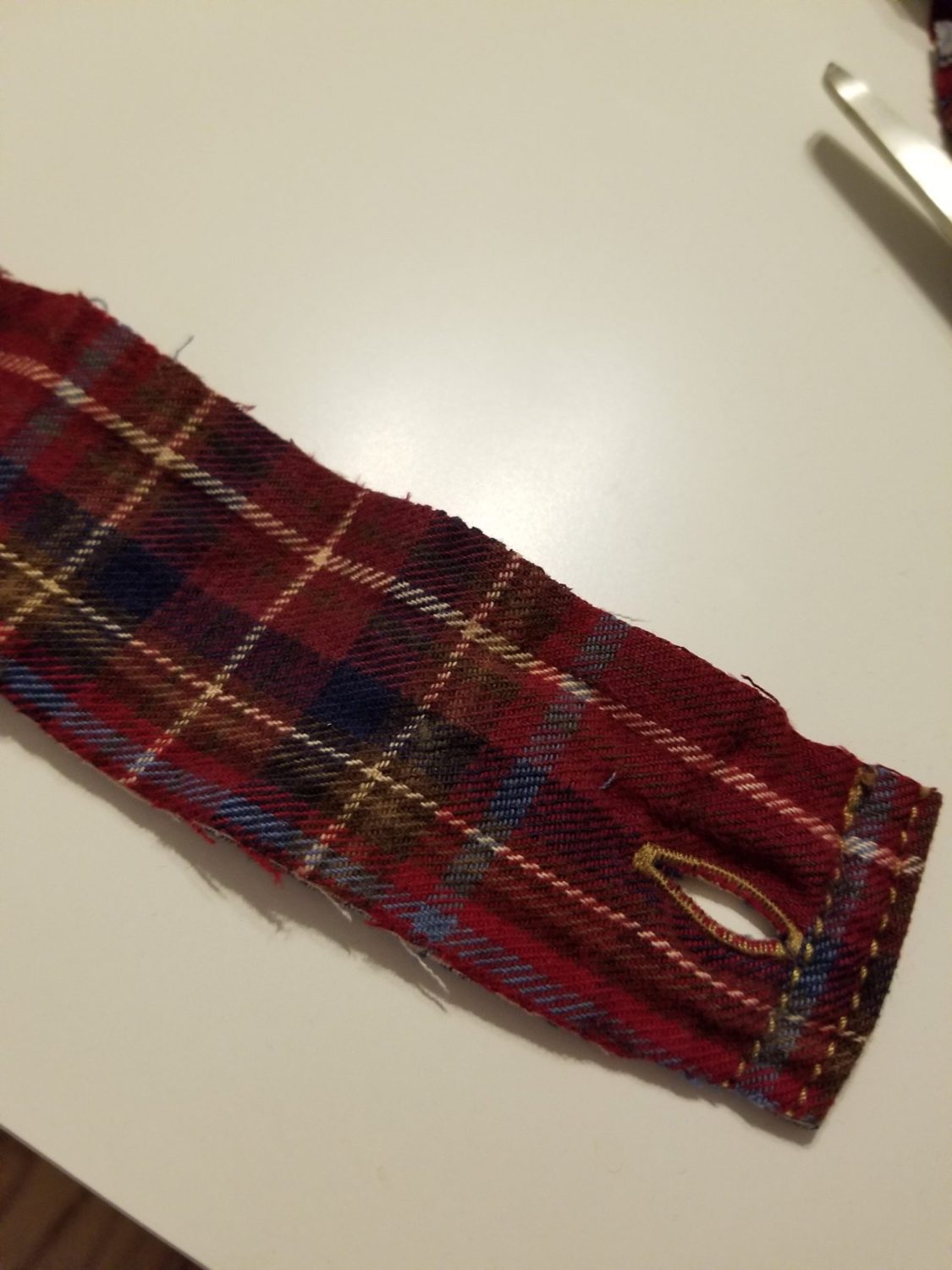 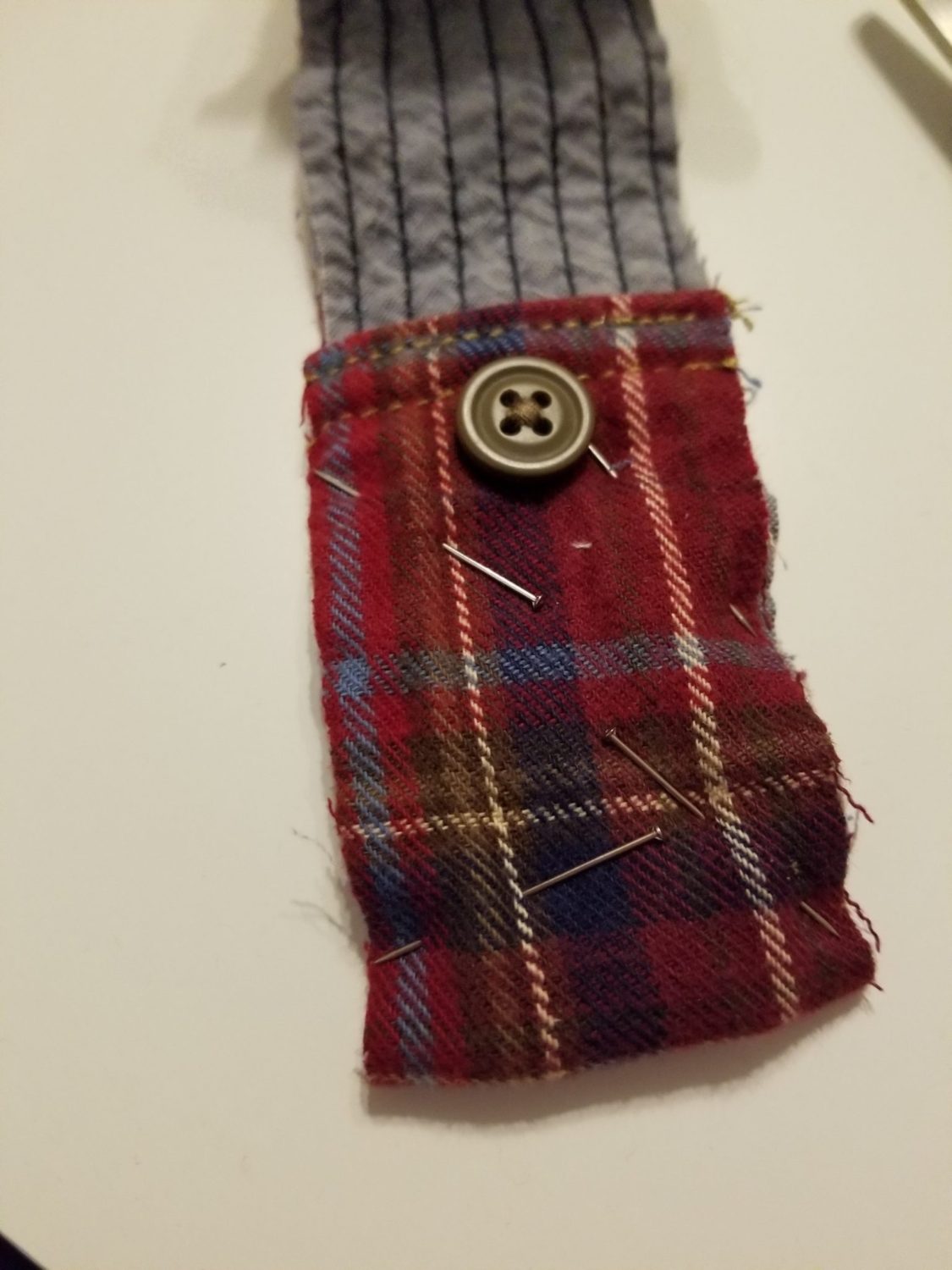 When sewing the straight stitch, make sure not to sew equidistant from the edges of the fabric but rather from the sides of the button.  This is because you’ll want your button centered in the middle of the keyring holder.  That’s why my stitches look uneven below.  They’re even with the button, though. 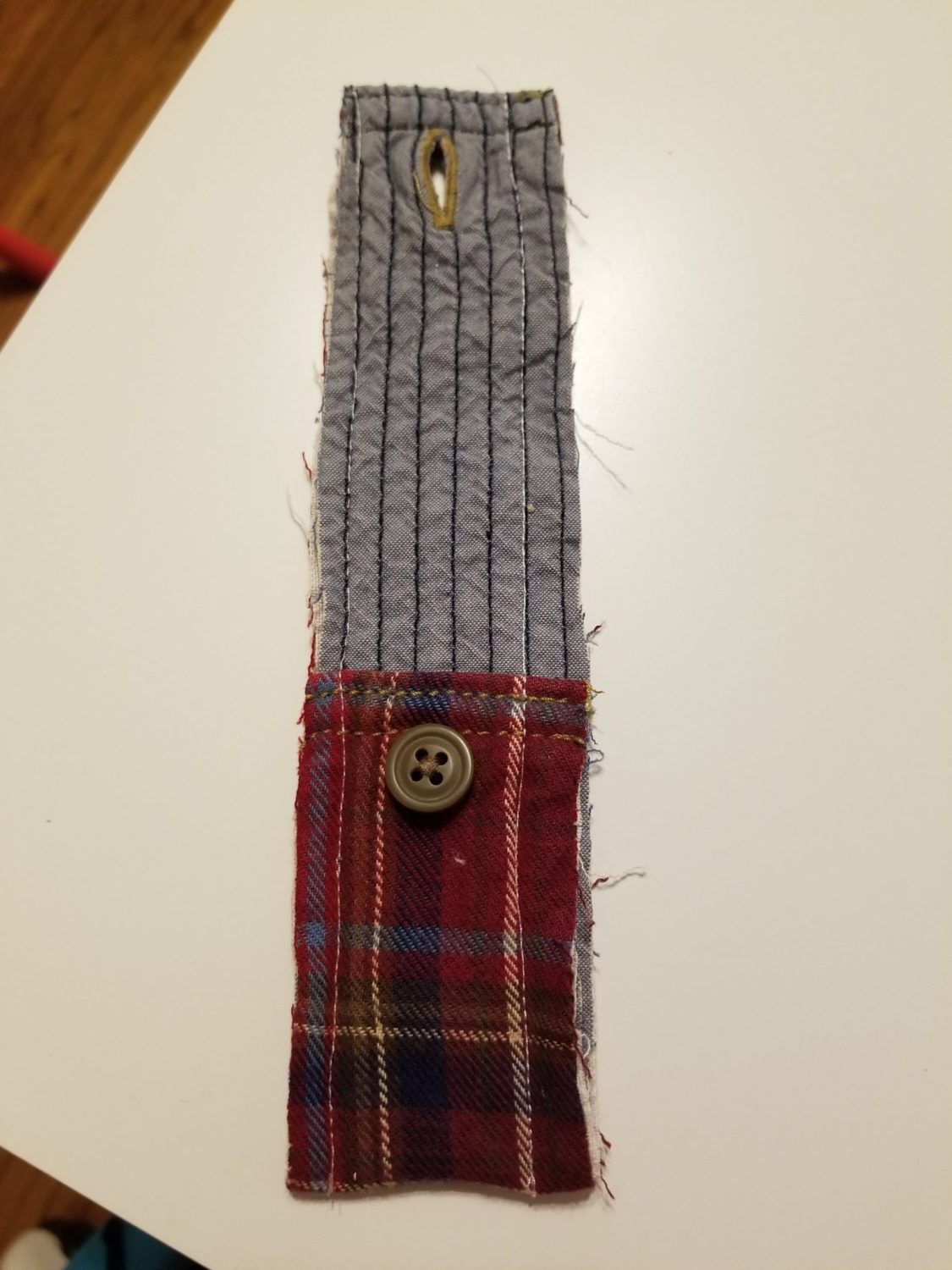 I also sewed a little tunnel at the top of the holder that was a little larger than the width of the binder clip and then put a round binder clip in it. That way my husband can connect it to his keychain!  I think it’s pretty awesome that he can button his chapstick in too if he wants!

Lastly, I used pinking shears to trim around the edges to keep the flannel fabric from fraying too much but still giving it a rugged masculine look.  Here are some pictures of all of this.  I find that pictures work better in a tutorial than a ton of words. 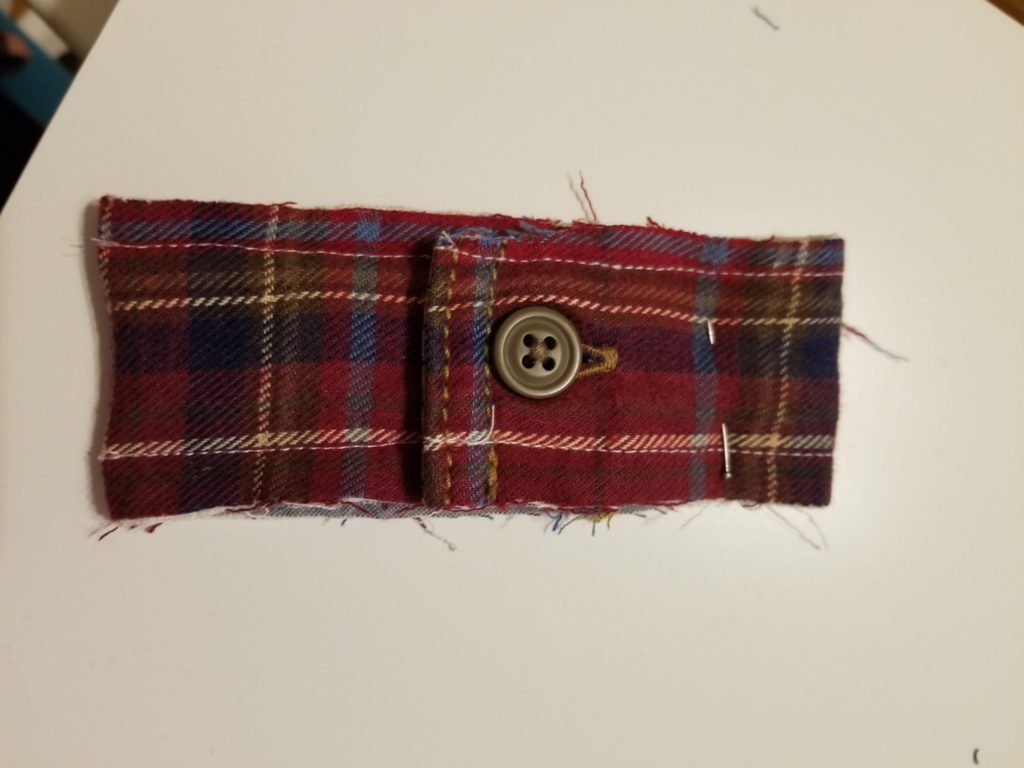 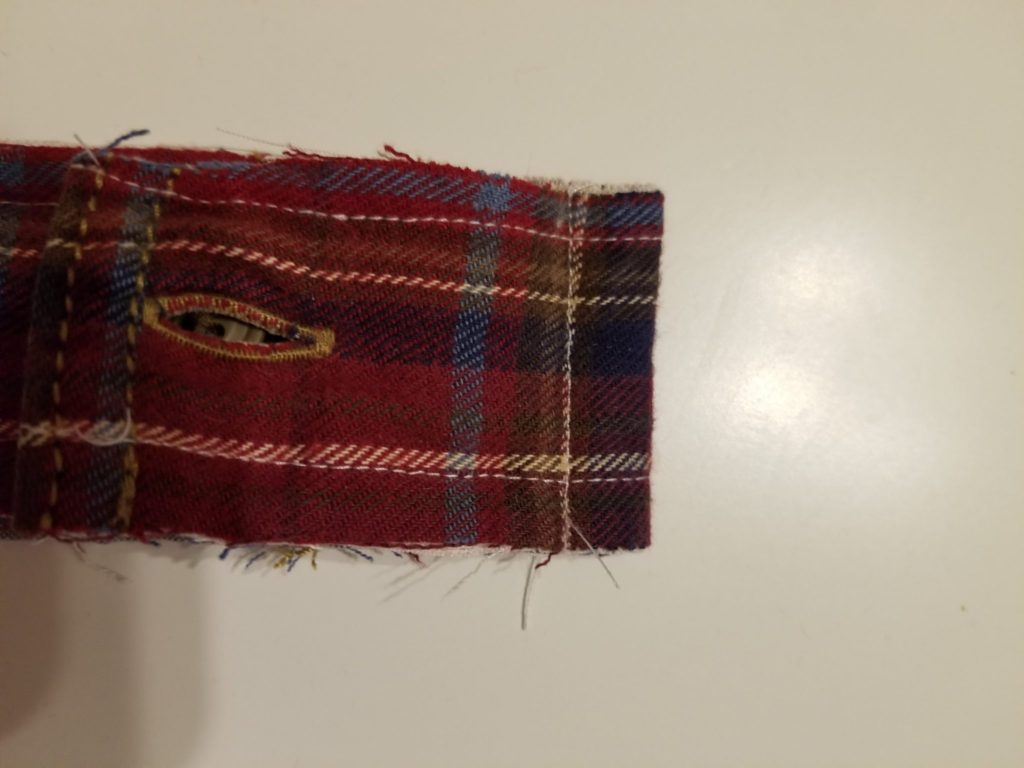 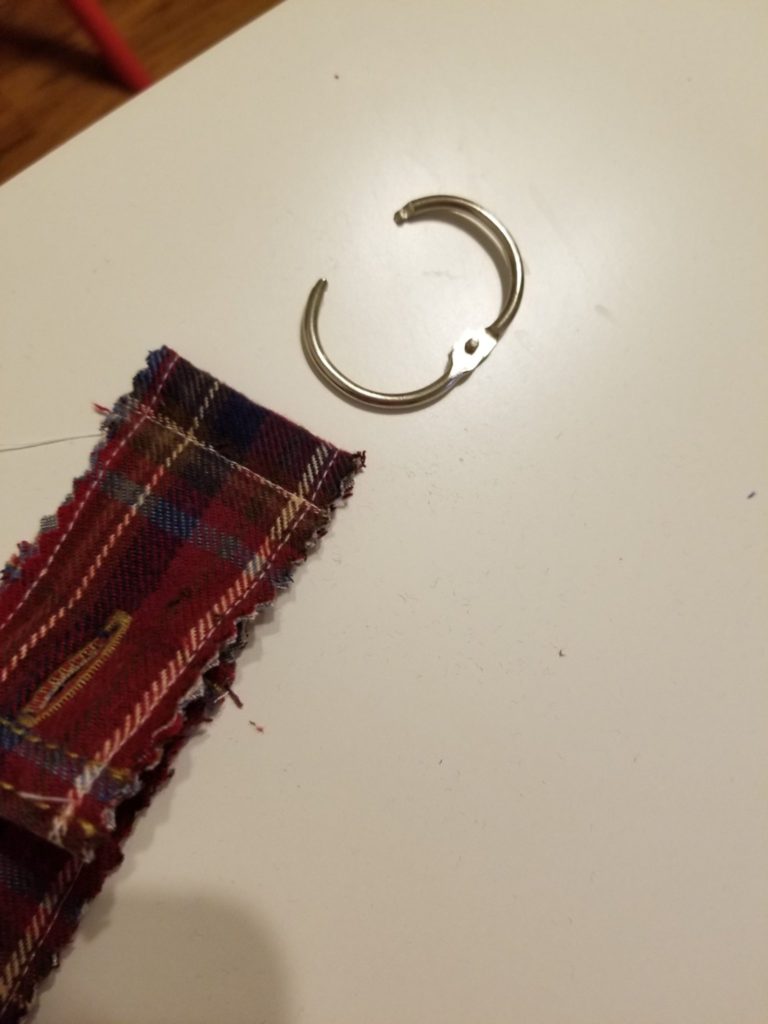 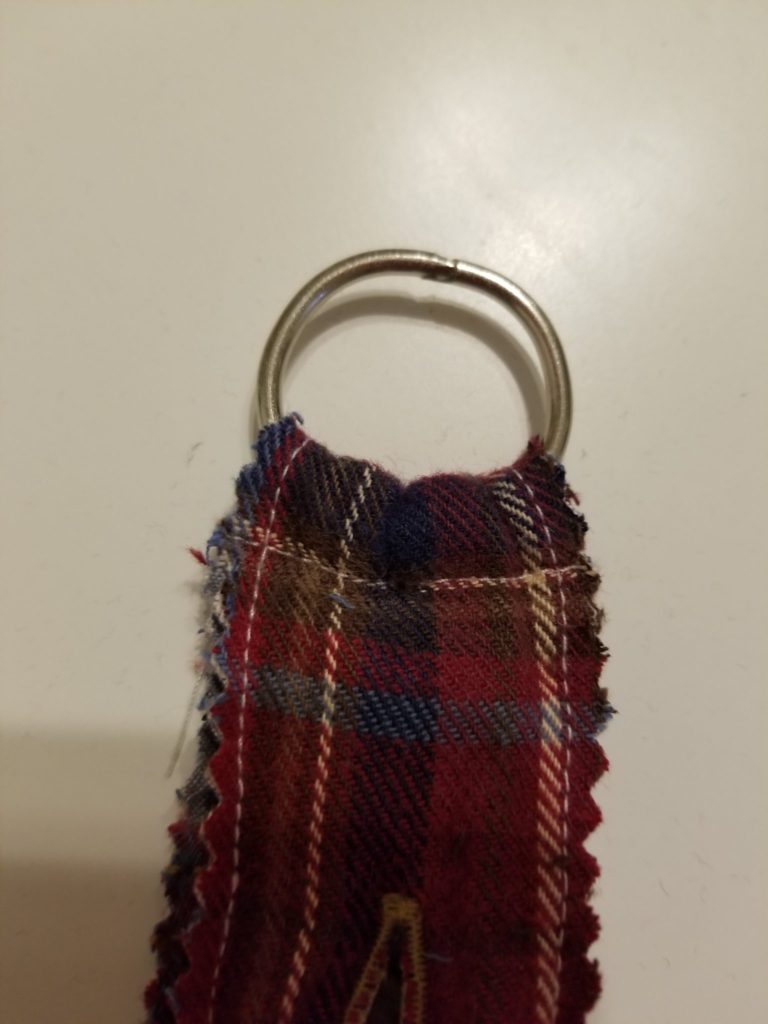 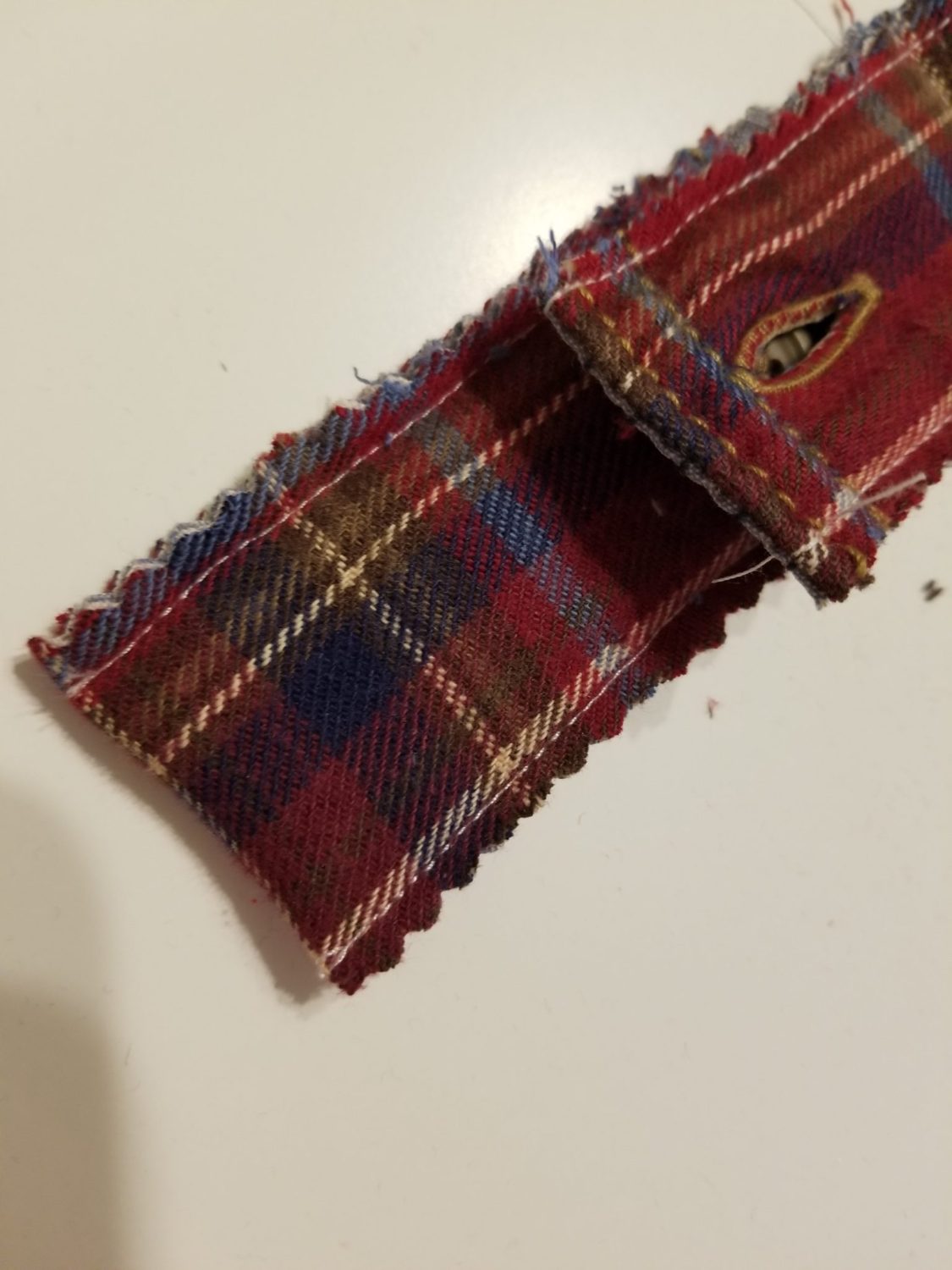 Here are some pictures of this finished flannel upcycle project.

You can use a binder ring at the top or a keychain ring.  As long as it’s a good diameter, either will work. 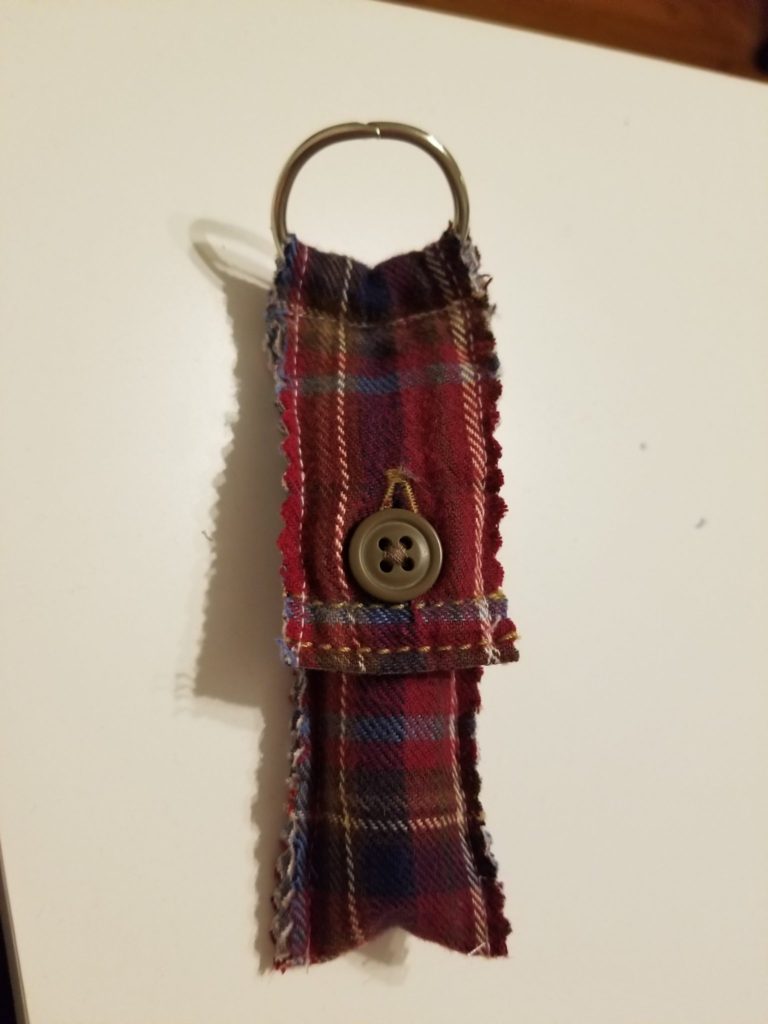 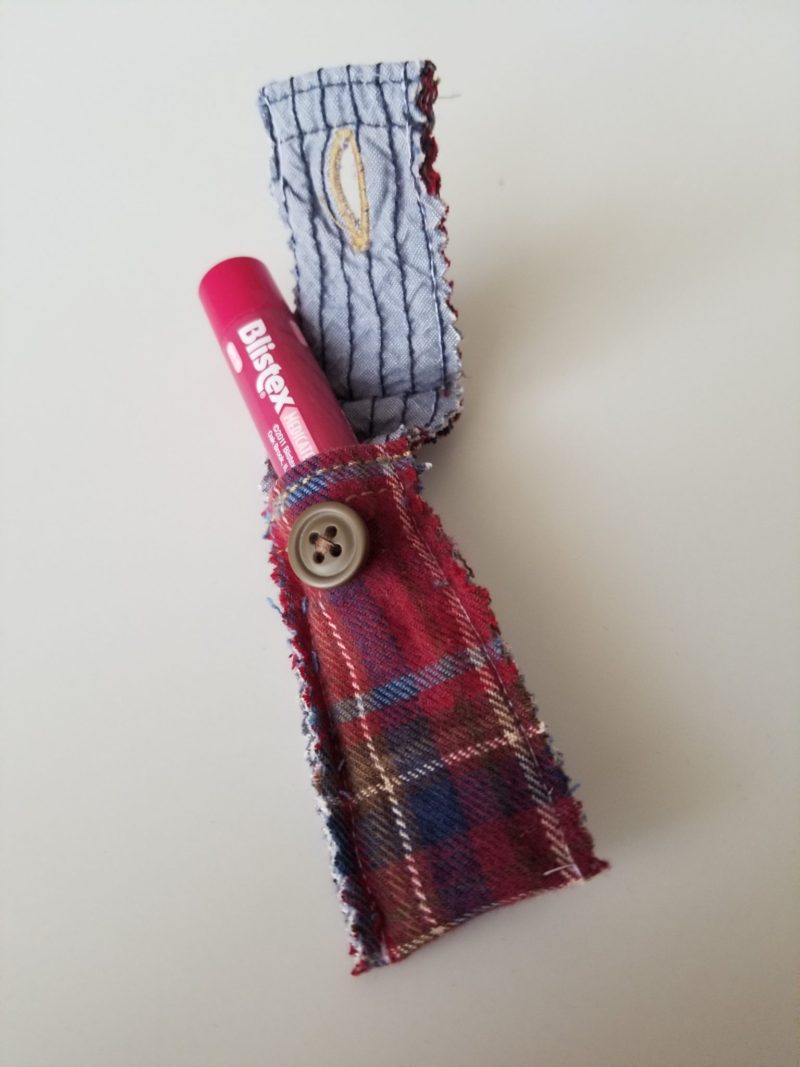 And that’s it for today, guys! So far the keyring chapstick holder has held up great, and the edges have frayed just enough to give it a rugged, manly look that my husband appreciates.

Interested in other upcycle projects?  Check out some more of our upcycle posts here! 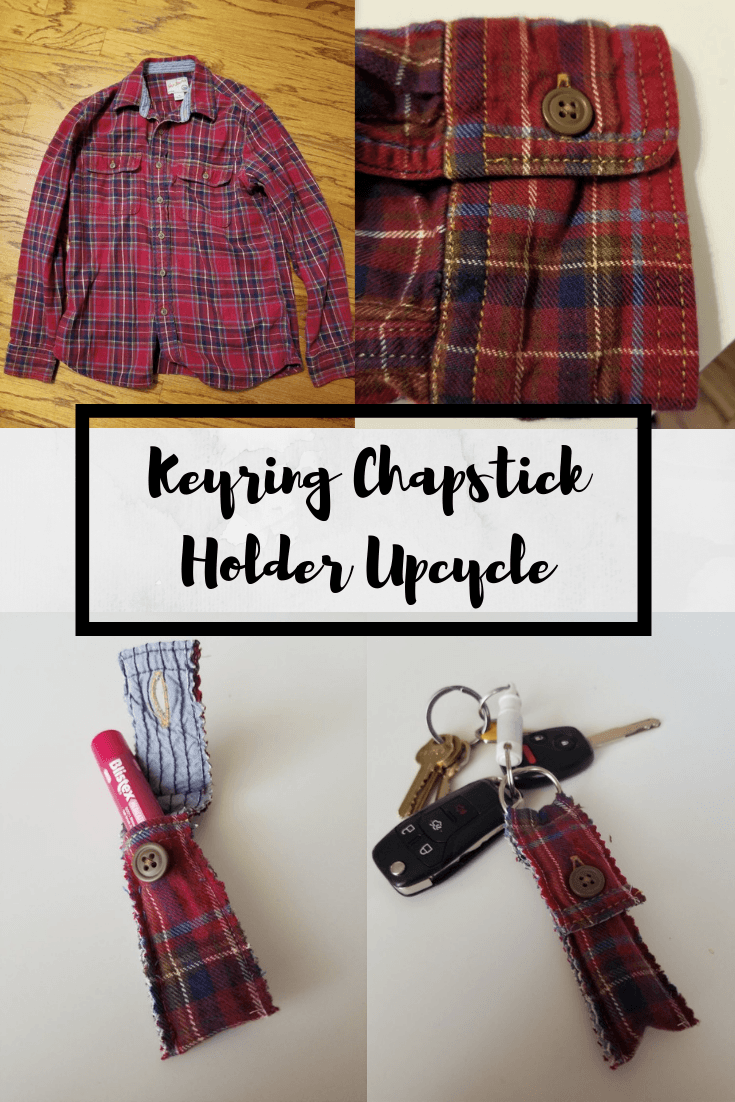