In my previous birthday posts, I explained my need to have separate birthday parties for my son and daughter. My son turned three and my daughter turned one. For me, I thought that the age of one was important because, well, it was her first birthday….ever. (She had a pink and gold first birthday party!)

And a third birthday was important because it is the first birthday where you actually KNOW it is your birthday. Anyways, it was important to me to make sure that I put in just as much effort for my son’s third birthday as I did my daughter’s first. So, I decided to create a Monster Themed Party. Overall, I think, it ended up a success. Here are some of the things we did to create the perfect Monster party and some of the best monster birthday food. 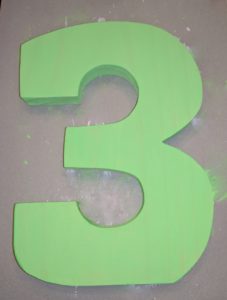 All of the decorations were monster themed or “3 year old” themed. I bought a few of these wooden three numbers and painted them green. I placed them around the house for decoration. On the number we had on the serving table, I added an eyeball just to add a little monster effect.

We also had all monster birthday food. Everyone had so much fun with this!

We, first, had “eyeball sliders.” These were meatball, marinara, and cheese sandwiches that I made. 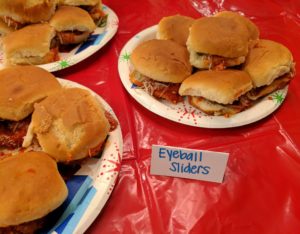 Then, we had “spooky sandwiches.” These were just ham and cheese sliders. 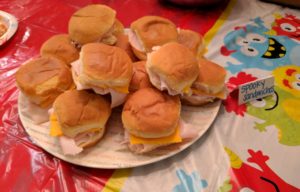 Next, we had some “Monster Toes.” The Monster Toes were little sausages wrapped in crescent rolls. 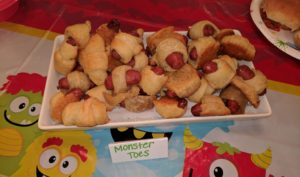 The “Creepy Concoction” was a 7-layer bean dip. (Sorry, someone was quite anxious to grab a bite of that delicious concoction). 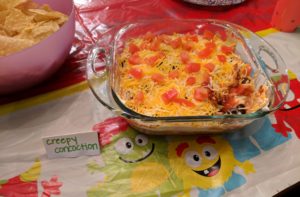 For the drink, I created a “Magic Mocktail” which was a Hawaiian Punch/Sprite mixture. 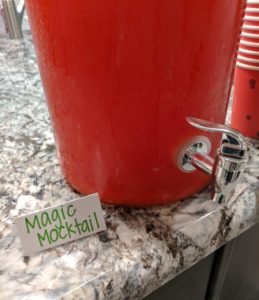 The dessert, however, was by far my favorite. I had a monster birthday cake made. It was the perfect addition to the monster theme. Believe it or not, I got it from Wal-Mart. They have the best bakery department! 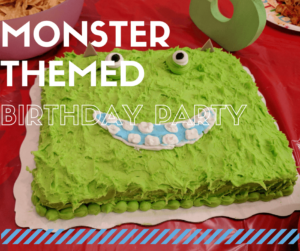 Overall, this was one of the easiest birthday to create, but still super cute. Amazon had a ton of cheap monster plates, cups, napkins, and decorations. Let us know if you have done a monster themed party!  What monster birthday food did you have? 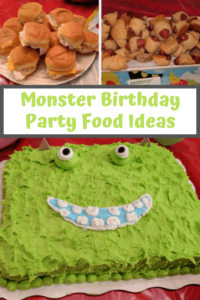