Teaching elementary math students to multiply decimals can be difficult for us teachers!  So often, students see a decimal point and they forget that multiplying decimals isn’t a foreign concept if they just take a moment to think about the process.  And there is no reason to just place the decimal randomly!

To help my students remember how to multiply decimals, I made this multiplying decimals anchor chart.  It hangs on the wall of my classroom.  When students now see decimals, I’ll find them looking in the direction of the anchor chart and organizing their thoughts rather than freaking out.

I find it helpful to create the anchor chart along with the students so they can be a part of the process.  If it’s a little messy during class creation, you can always make a separate one after school’s out.   I then hang the anchor chart on the wall for students to refer back to as we are learning and practicing the concept. 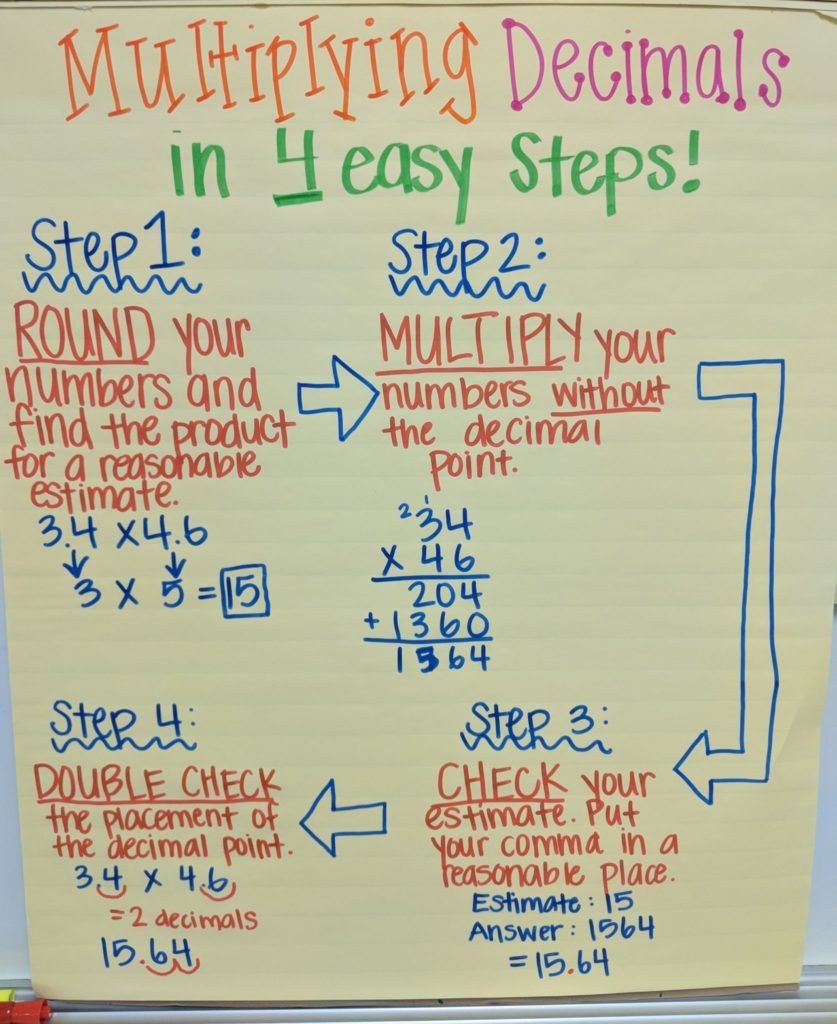 Students need to understand the concept of decimal multiplication along with the rules.  When tackling a seemingly complex problem such as decimal multiplication, I find it easier to break the process down into small, manageable steps that will help them understand.  That’s why this multiplying decimals anchor chart has 4 simple steps.

Here are the steps that I encourage students to follow when multiplying.  As an example in my anchor chart, I show how to multiply 3.4×4.6.

How This Multiplying Decimals Anchor Chart Has Worked In My Classroom

This decimal multiplication anchor chart has helped my students a lot with this concept. Instead of jumping ahead to multiplying the whole numbers and then randomly placing the decimal, my students now slow down a little more to try and understand the concept behind decimal multiplication.  I still find some students willy-nilly throwing around decimal points, but overall, I’ve seen a definite improvement!