A few years ago, I did a diaper box upcycle project and made decorative storage boxes.  Since the craft went so well, I tried another cardboard box craft project, this time making a cardboard number 4 out of flowers for my daughter’s upcoming flower birthday party. 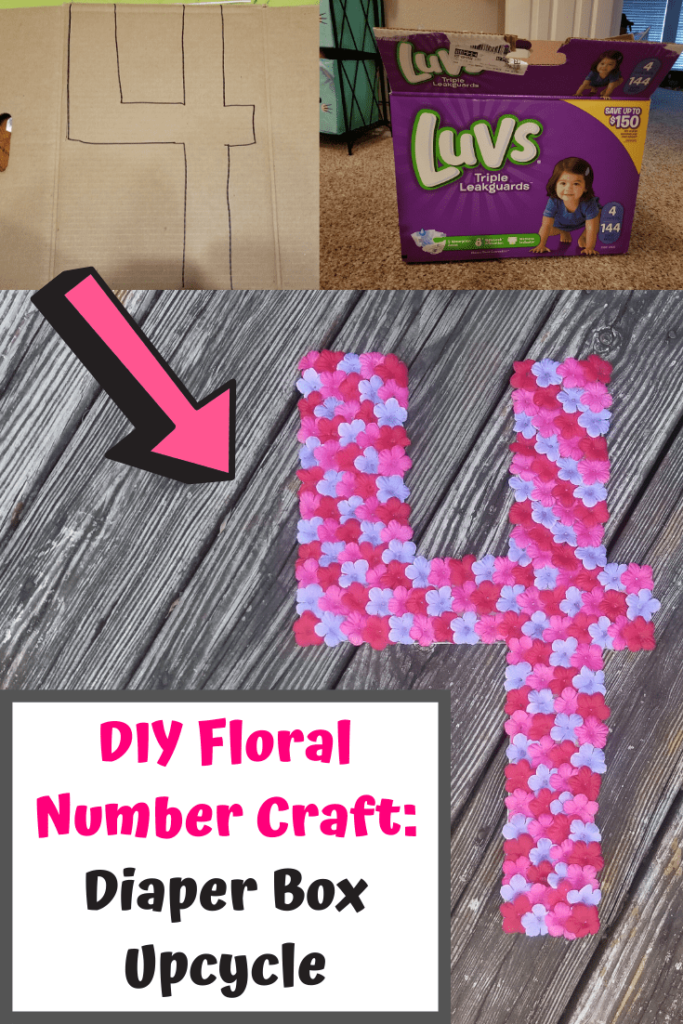 This craft project took very little time and energy to make.  I was able to glue away while mindlessly watching girly TV (always a plus in my book!)  Since I reused cardboard diaper boxes, the only real cost associated with the project was the fake flowers.  I got my fake flowers as part of a grab bag from Michael’s, so this was an affordable project using items I already had around the house.

If you’re silently judging me at this point for having my almost 4-year-old still in diapers, just know I’m sourcing the diaper boxes from my 9-month old’s supply!   Also, if you don’t have diaper boxes around your house, you can use any cardboard box as the base for this craft.  As an online shopping fan, we always have Amazon or Target boxes around the house that will work for this cardboard box craft!

Here’s this quick and easy tutorial for how to make a cardboard number out of flowers. 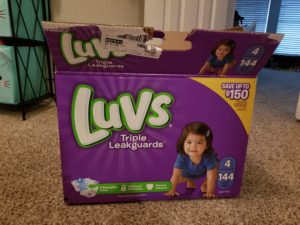 How to Reuse a Diaper Box to Make a Floral Number

First, you’ll want to cut out your number base.  Since it’s my daughter’s fourth birthday, I’m making her a number 4.

After tracing an outline in permanent marker, I cut out the 4 using an X-acto knife.  I’ve tried using scissors for cutting cardboard before, but it just hasn’t worked out as well.

I preferred to keep the brown side of the box as the front and the outside of the diaper box as the back.  Since my fake flowers were so densely packed, neither side would have shown through.  This is just something to keep in mind if you’re making your own flower number! 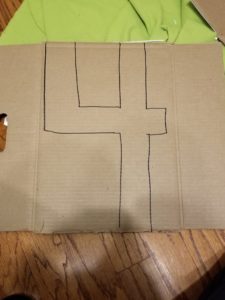 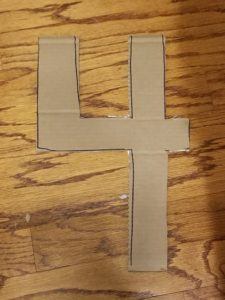 Once the 4 was cut out, I decided to determine the pattern for the fake flowers.  I wanted three different colors and a repeating pattern.  I had to remove all the flowers from the stems first.

All that was left was to glue the flowers on.  This was by far the most time consuming, but also most mindless, part of this upcycle project.  For some reason, repetitive tasks, though, give me time to think to myself, and I find them relaxing!

I used craft glue, so the flowers were still moveable for a while after adhering.  I like hot glue for some craft projects, but the glue just dries too quickly for my tastes.  This project took a little finessing to get the pattern to work out perfectly; slow-drying glue was thus my friend!

After the glue dried, the floral number decoration was ready to be hung at my daughter’s upcoming flower birthday party!

All in all, a very quick project, and a very inexpensive decoration idea!