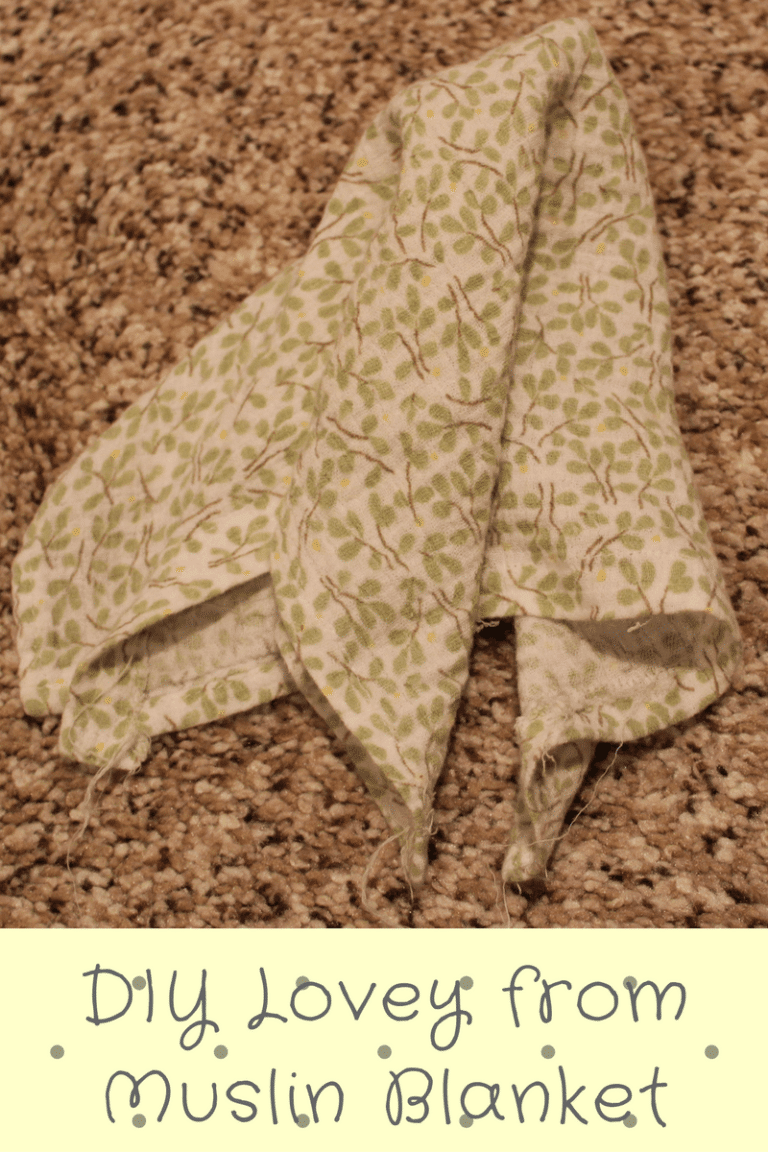 I want to let you in on the secret of how we made a DIY lovey for my daughter from her favorite muslin blanket.

When we first brought baby girl home from the hospital, we tried to swaddle her in those adorable flannel receiving blankets we had gotten as a baby shower gift. Unfortunately, if your child is in the 97th percentile for height and is a mini Houdini in her sleep like ours, those blankets soon end up being glorified burp cloths rather than swaddles. After a week of her escaping despite our best efforts to swaddle well, we made a semi-emergency trip to the grocery store and bought a 3-pack of muslin swaddle blankets. They were much longer (great for tall babies!), a little stretchier, and more breathable.  In the event she did unswaddle herself and pull the blanket over her face, no worries!

When she was a little older, we eventually made the transition to a swaddle sleepsack for nighttime and kept the muslin swaddle blankets for nap time. Up until she was able to roll over, we rotated the same three blankets every nap. She became very secure with them. Once she started rolling, we boxed up the swaddles and swaddle blankets and transitioned her to a wearable blanket for safety reasons. This was the end of good sleep for practically forever and a long story for another time.  Gosh, she LOVED a good swaddle in those baby days!

Why did we need a lovey?

When we were desperately trying to get her to sleep longer stretches at night when she was older, we decided she needed a lovey. We were a little anxious though about what to put in her crib.  We didn’t want her to wrap it around her neck or stick her face in it and suffocate. So we decided to repurpose one of her beloved swaddling blankets. It worked great!! I made it small enough so there is no way it could wrap around her neck.  Even bunched up, the fabric is still so breathable.

How to make a DIY lovey:

I first measured a 12ish inch square from the corner of the muslin blanket and cut it out. 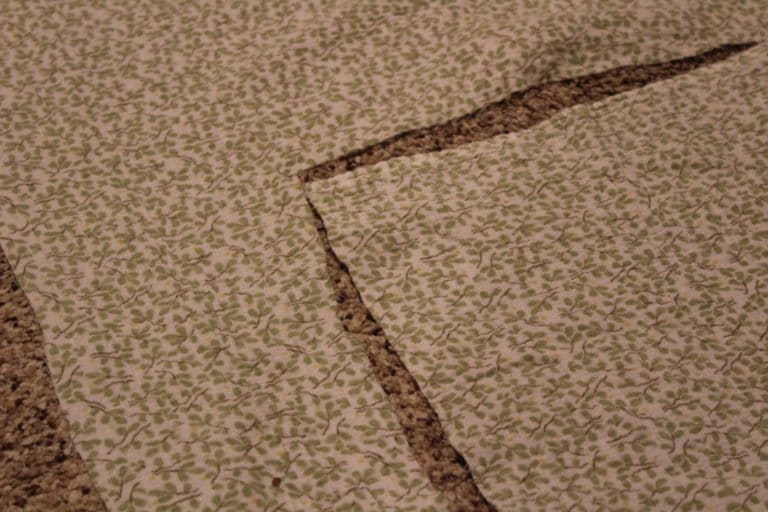 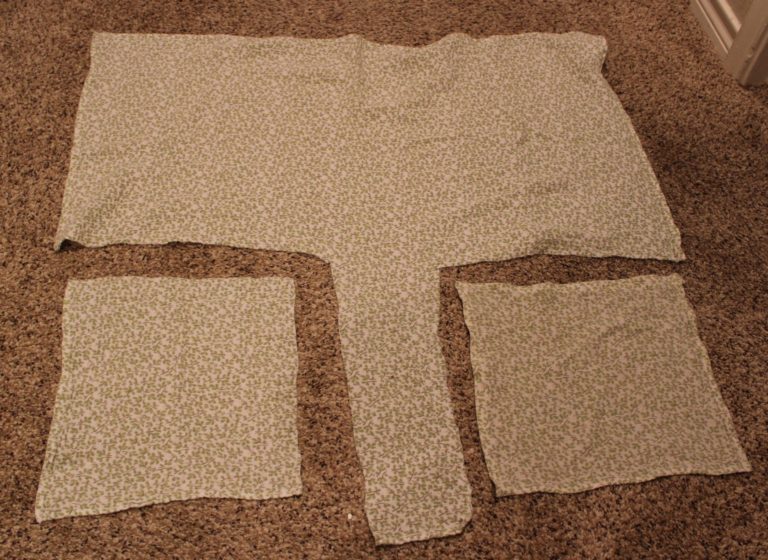 Then, I quickly sewed the two cut sides with around a 1/4” seam allowance. Usually when sewing, I try to cut straight, iron, and finish the edges or double fold the edges for aesthetics.  This tired momma just needed something fast this time!  This project was done in a approximately two minutes! 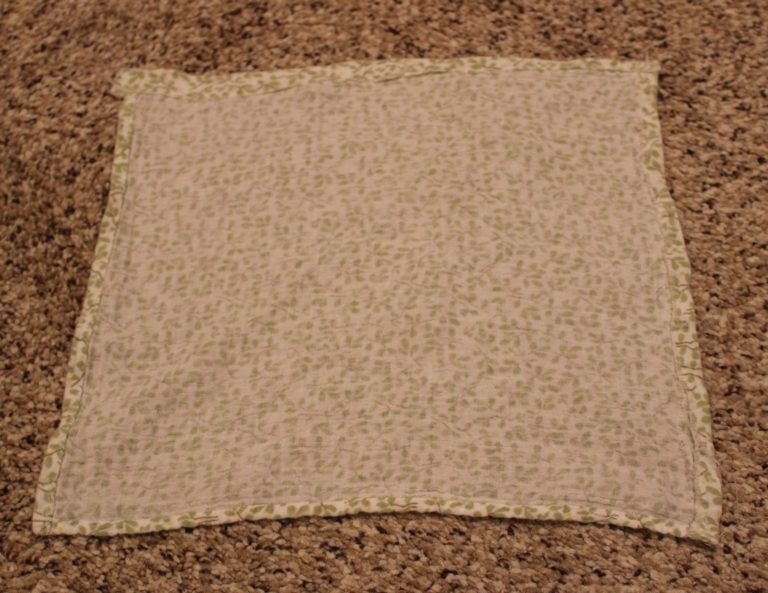 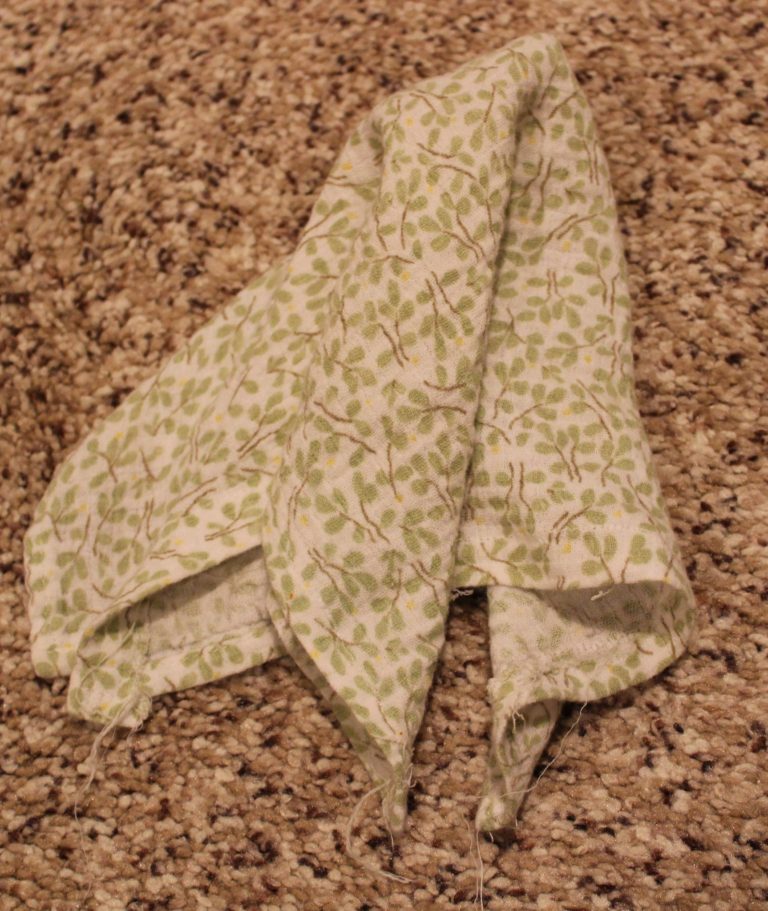 Make more than one muslin lovey while you’re at it!

A plus of this is you can make several loveys and switch them out.  You also have a backup just in case one gets thrown in the wash or lost.  Unfortunately, we learned this the hard way!  Also, one of the replacements we made I didn’t even sew around the edge, and it hasn’t unraveled too much.

At first, our daughter didn’t care much for our DIY lovey.  We started incorporating it into her nap time routine as well as her bed time routine though.  Now, it is a necessary part of her routines and a comfort to her in her crib! We call it her “hankie” because when she is tired, she crawls to her crib, sticks her hand in to pull it out, and then rubs it all over her face while getting her tired eyes on! We then know it is nap time or bed time.

What are your ideas for how to repurpose those muslin swaddle blankets? We still have two more packed in a box in the attic!

Making a lovey out of a muslin swaddle blanket was such a smashing success for our first daughter that we replicated the process with the second.  This time around, I was prepared and sewed one the right way!   I’m also a MUCH better (and less lazy) sewer than I was three years ago!

I used the same dimensions as the first lovey, but I first finished the edges with an overcasting stitch.  (You could also zigzag, but I’m fascinated by my overcasting stitch on my sewing machine right now.)  Then, I turned the edges over with a 1/4″ seam allowance and straight stitched them down.

Check out how the seams look as well as the finished project.  I’m patting myself on the back for definitely sewing a professional looking muslin lovey this time around! 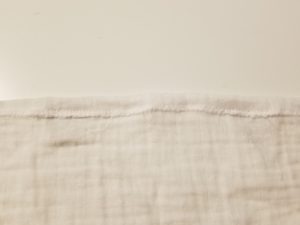 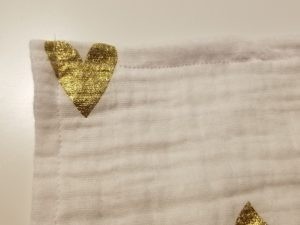 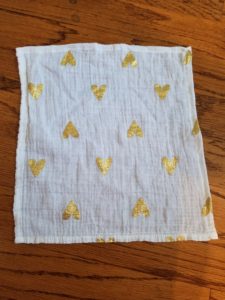 As an aside, I also was fascinated with the narrow rolled hem foot that came with my sewing machine, but I can assure you, muslin is a bad fabric for trying that out on unless you’re an expert seamstress!

I hope sewing your own lovey will work as well for your baby as it did for my two girls!

If you’re interested in DIY, check out our DIY page! 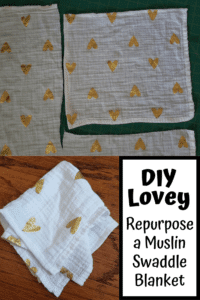